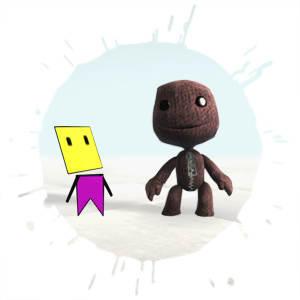 Back in 2006, When Alex, Mark and Dave pitched LittleBigPlanet to Sony, the loveable bag of fluff we all know as Sackboy was nothing more than debug programmer art - a little pink square body and a triangular yellow head,  aptly called YellowHead.  Even at that early stage the character that would become Sackboy had started to emerge, but how did he evolve from that set of simple shapes into the Sackboy we all know and love? It’s been two years this week since LittleBigPlanet was released, what better time than this could there be to find out?

Last October was the first anniversary of LittleBigPlanet, and being relatively new to Mm, I was keen to find out where Sackboy came from. In order to enlighten us all, I grabbed two of the key artists involved with his creation, dragged them into a room and, bombarded them with questions…. Unfortunately we never actually published the results… until now…

“He had a lot of personality, even then” reflects Kareem, as he, Francis and I glance at some concept artwork and look back to the early days of the now iconic character’s origins.

“I think it was the cheekiness.  Dave always does that, pays attention to personality and very subtle things. When YellowHead was pulling the big old rock, the character looked like he was straining, even though there was no supporting animation… his little debug arms stretching as he pulled.”

YellowHead was very much placeholder programmer art created by Dave for the first playable CraftWorld code which was taken up to Sony on that fateful day of the pitch. But although he was merely a stand in, he ended up dictating the proportions of Sackboy, and the things he would need to be able to do.

After the team got the go ahead to develop the game, the character needed to evolve into a proper character to fit the game’s developing art style, and so Mark, Francis and Kareem all went to the drawing board and started to concept.  For quite some time the character was still called YellowHead and indeed kept the yellow head after which he was named.

“I don’t know why but I always drew him with this little mosquito antennae on his head. My designs were always very anatomical, with legs and arms, whilst Francis was exploring body proportions and shapes - how the head relates to the body. It was Mark who was really pushing the handmade look, the buttons, patches, and the hessian fabric.”

As Sackboy was reshaped time and time again, it was these handmade aspects that stayed true throughout everyone’s designs. There were three distinct versions of Sackboy shape wise, but you could see the similarities between them too.

“We were struggling. But then Dave came along with some doodles, once again bringing a bit of personality and the subtle shapes. It refreshed us all”

Dave’s sketches show the arrival of the trapezium head, the attitude, and the wrinkles in the cloth from his expressions. These tiny things were a huge influence on the final design. 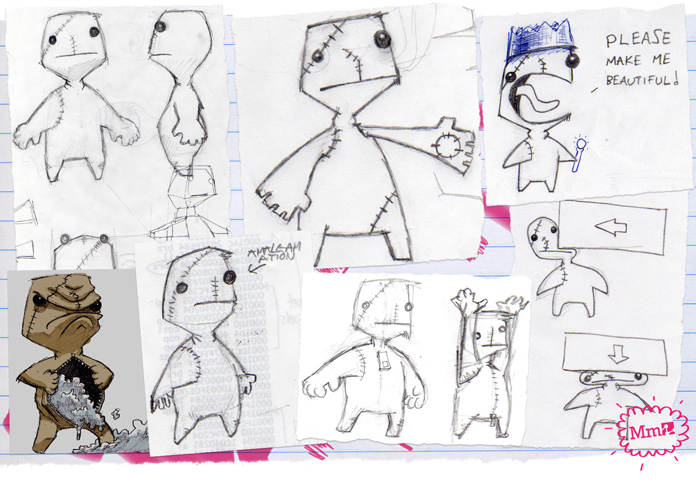 “This really helps to illustrate the Molecule way - Francis is a character designer, animator, artist, I’m a concept artist, Mark is an experienced 3D artist, but a programmer was the one who came in to the mix and added an iteration to the character design that really helped us all, and solidified what we were trying to do”

By now, one of the most distinct features of Sackboy was prevalent throughout all the designs. The zip. These days it’s just a cute feature of the character, but it was not always just for show; once upon a time it had an important function.

“There was always a concept of a place where you play, and a place where you build that eventually became the Moon. But at this stage various ideas were flying around - an extra room in the pod, a warehouse somewhere. But then Mark came up with a crazy concept…”

“Maybe the place where you go to create is… in yourself. Let’s put this zip on Sackboy, he opens the zip, folds in on himself and goes and creates inside himself, because creativity and ideas are all inside you.”

“I’m kind of glad to say that this idea didn’t manifest” laughs Kareem “it’s a legacy part of design, but it makes him really distinct.”

From this moment on, Francis took the wheel “we thrust all these designs into his lap and said - ‘make it cool!’”  Francis looks bemused, and shakes his head.

“Sackboy ended up being a combination of these 4 concepts” Francis pipes up “and you can see it - Mark’s crafty vibe, Kareem’s pinched limbs, the more appealing shape and proportions of my drawings”

Sackboy evolved into a very familiar shape, but his legs were still very much from the abstract design by Mark, short and pointy. 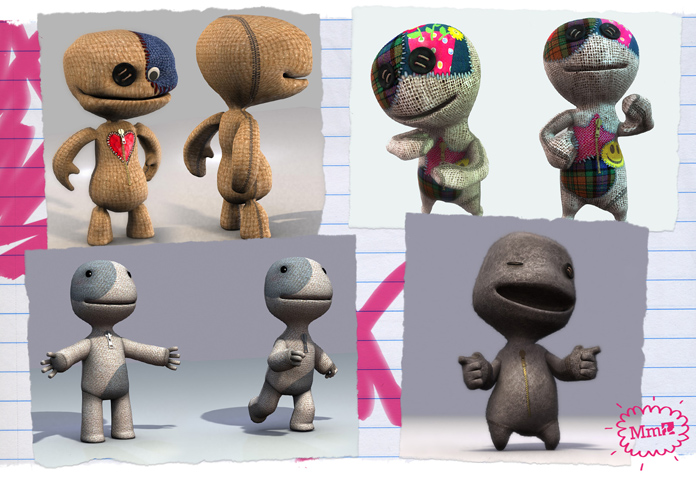 “The green light used this version” Francis points to a semi formed Sackboy render “ultimately though his legs felt cute but stumpy and very different from the language of the arms. When he was animated, running and jumping looked weird, so the legs were evolved.”

It was the animation of Sackboy that would help to give him more character. Animations which evolved only when the designers started making levels and people started seeing him in different situations.

“From day one he was grabbing and swinging, but for instance he looked strange as he swung about. Sackboy doesn’t need to build up momentum to swing forward, he just somehow creates energy from nothing, and the animation needed to support than.” The solution became the little peddling motion you see now.

“I bet Bruce Lee can do it” quips Kareem….  “But it looks convincing, you know?”

Kareem turns and asks Francis about animating Sackboy compared with animating traditional scenes, or films.  “Animating Sackboy was very fragmented… it’s not as satisfying to animate a character like him as it is to work on a whole movie, because you are designing procedural animations rather than acting a scene.“

“It’s the user controlling the actions. It’s less satisfying to create, but the reward comes from seeing what people do with it. The mad dances and machinima really amazed me, and the way people use the basic acting emotions to talk to each other - they almost became a sort of language people used to communicate to one another whilst playing. The Dances mainly though. But yeah it’s not quite the same as animating something that gets played out the same way each time”

“The Death animations however, they were really fun to do…”

LittleBigPlanet features numerous lethal objects or materials to hinder Sackboy’s path, and each one required a unique animation to accompany it. Tom and Jerry would be the key inspiration for the animations that made the final cut, fairly violent, but whilst still feeling harmless and funny.

“It was quite far along into the project, and I’d really started to hate Sackboy at that point, so I kind of relished the idea of coming up with ways of killing him.”

All sorts of horrible ways for Sackboy to expire were created, some were way more extreme than others.

“I really liked to describe the way his material behaved, so some of them involved his thread being caught and him unravelling, or his fluff spilling out everywhere.

Glancing at the collection of sketches, I see Sackboy impaled on spikes, horribly squished or burned into a heap of ash. In the end the decision was made to make it a bit less gruesome, kick up the loveable, cute aspect. 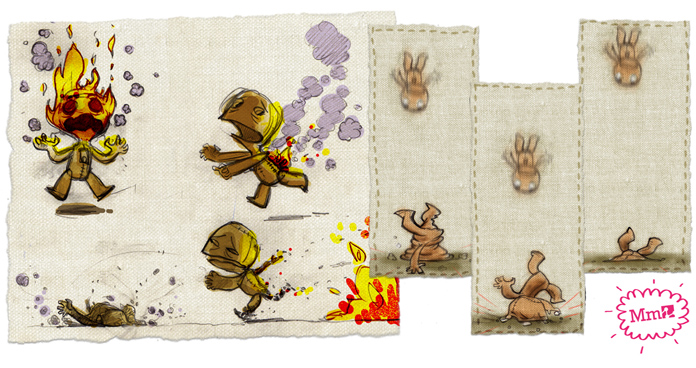 These seemingly small decisions were ultimately very important in defining the tone of both LittleBigPlanet and Sackboy as a character. I ask the guys about the challenges involved with building a character that needs to help define a game, and be infinitely customisable.

“To make a character who will be huge on the screen is one thing, but to make one that will be tiny, but still distinctive, is another.”

“We had to design a character that, in his plain version was distinct and iconic, knowing that you could also add moustaches, hats, eyes, and even easily make him male or female without changing the body shape.”

As time has shown, the guys have done well. Sackboy is now adored by gajillions of people around the world, people inspired to play, create and share with him by their side.

“It’s not just that he’s cute and loveable - he really does connect. People really want to have a physical Sackboy, we always, always get asked about plushies.”

“He’s cool…. people can project onto him, play with him however they like, like real life toys, or dolls.”

It’s true. Those who love Sackboy love all of his variations, they love to dress him up and customise him, even going way beyond the costume pieces made specifically for him, bolting on random objects and creating detailed stickers to paint him with. Others break out the knitting needles and set to work creating their own real life dolls.

I ask Kareem and Francis about the effort and time people spend customising their Sackboys, and how key that aspect of the game now is.

“The customisations people have been doing are insane! Using objects and stickers like they do…. We started working with famous brands to make download-able costumes, only to discover that someone somewhere has already had a pretty good attempt at making that character.”

“I thought Sackboy customisation would be a side thing, not a key part of the game for anyone, not something people would play.” adds Francis.

“Seeing how people wanted to spend so much time on this, we’ve since added in features to support it, such as being able to zoom in, and rotate Sackboy to make it easier to sticker him.”

Through Download-able Content, and various free game updates, Sackboy is forever being enhanced, gaining new costume pieces or objects with which people can decorate him… but what’s next for our favourite little mascot?

“There’s more to come for Sackboy, definitely, it’s very exciting - you’ll see him as you never saw him before…. say something like that.” smiles Kareem, and we all chuckle knowingly and head off to make some coffee.

Of course at the time of the interview we were yet to announce LittleBigPlanet 2, so those knowing chuckles were mostly to do with all the new costumes and features from the new game, such as Sackbots. Still though, there are things you have yet to see, and lots to look forward to! In the mean time, let’s all say a big Happy Birthday to LittleBigPlanet, we celebrated with cake, and so should you!
Be sure to check out more Sackboy concept artwork in our Flickr gallery.