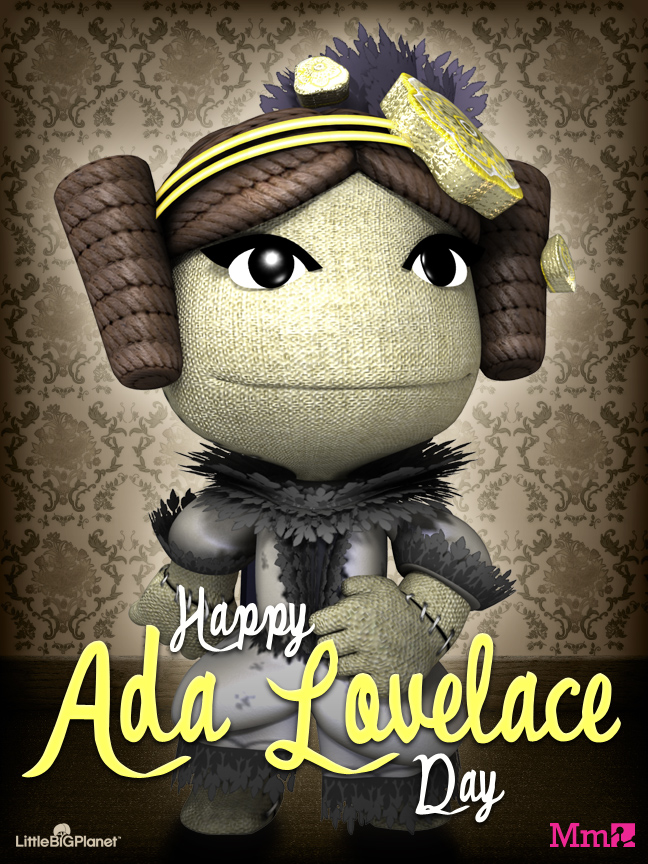 Today is International Ada Lovelace Day! An international day of blogging to celebrate the achievements of women in technology and science. We’re fans of all those things here at Media Molecule so we had to join in the other thousands of blogs worldwide that are celebrating today.

Not sure who Ada Lovelace was? Well, she’s most well known for writing what is considered to be the worlds first computer programme…

Augusta Ada King, Countess of Lovelace was born on 10th December 1815, the only child of Lord Byron and his wife, Annabella. Born Augusta Ada Byron, but now known simply as Ada Lovelace, she wrote the world’s first computer programmes for the Analytical Engine, a general-purpose machine that Charles Babbage had invented.

Ada had been taught mathematics from a very young age by her mother and met Babbage in 1833. Ten years later she translated Luigi Menabrea’s memoir on Babbage’s Analytical Engine, appending notes that included a method for calculating Bernoulli numbers with the machine – the first computer programme. The calculations were never carried out, as the machine was never built. She also wrote the very first description of a computer and of software.

Understanding that computers could do a lot more than just crunch numbers, Ada suggested that the Analytical Engine “might compose elaborate and scientific pieces of music of any degree of complexity or extent.” She never had the chance to fully explore the possibilities of either Babbage’s inventions or her own understanding of computing. She died, aged only 36, on 27th November 1852, of cancer and bloodletting by her physicians.

Andra Keay has made a rather nice presentation about Ada for today too:

Ada Lovelace (for schools) on Prezi

Read more about Ada Lovelace on Wikipedia, check out the discussion on Twitter with #ALD10 or head over to the official Ada Lovelace Day site, where you can register your blog and submit your favourite heroines as part of the celebration today.

Last year we celebrated Ada Lovelace by making a rather cute Ada Lovelace costume for your Sackgirl, which is still available to download from the PlayStation Store.