With LittleBigPlanet 2 launching this week, we thought now would be a good time to talk in more detail about the backwards compatibility between the new game and your current creations.
We’ve worked tirelessly to make sure LBP2 is able to play all of the LBP1 levels, and we’ve managed to assure that 99% of all physics, electronics, logic and character handling are fully backwards compatible. 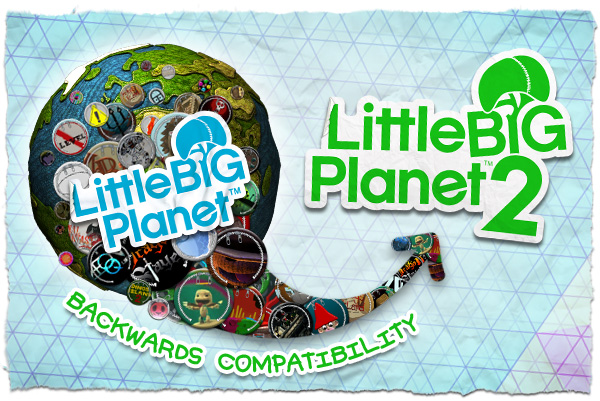 However, testing all 3.5 million levels and finding ways to support all the awesome crazy techniques and things you guys have created is a sadly impossible task! So whilst all levels will play, some might need tweaking to make sure they work absolutely correctly.
We’ve put together a list of things to look out for that we know might affect a level, and also things to try if you find your level isn’t working quite how it used to. If you are worried about your level, or come across a problem, have a read all of the information below and you still can’t fix it, we suggest seeking help in the official LittleBigPlanet forums, or one of the many awesome fan sites out there.

Physics: levels that play themselves

Levels that rely heavily on long chains of collisions that work in a very specific way may need tweaking. This is most likely to affect the ‘levels that play themselves’ such as the cause and effect series. (which by the way there is a new one of!)  The problems with these levels will arise due to the player becoming stuck. They can usually be fixed by shaving small areas of material away to give the player more room to navigate the level

Creatures that have protected creature brains that are destroyed by logic will not necessarily have the destruction effect transported across all connectors as it did in LBP1. The end result of this is that creatures will only partially destroy when the logic is triggered.

The way LBP2 handles emitters is different to LBP1. This has had an effect on the thermometer and can potentially cause some levels that make extensive use of emitters to immediately overheat or in some cases stop functioning part way through a level.

Snapshot Cameras no longer show the angle and countdown when they take a picture. Levels that relied on this mechanic will need altering.
The default game camera no longer has the slight tilt to it that it used to have, and as a result it may be possible to see out of the world in some levels, however cases of this are fairly low.

We gave the lighting engine an overhaul to make some visual improvements. This means however that there are some differences in the way LBP2 deals with lighting that might affect an older level.
Lights behind objects that used to shine through them will probably cast a shadow onto an object, which can make levels seem much darker.
Certain lights placed onto the back of a block of material, that has another different light placed on the front, will result in the light on the back shining properly, but not the one on the front.

There is a chance that stickered/decorated spawn gates and score boards will have lost some of their stickers/decorations. This is due to these meshes having been optimised in LBP2.
This could also affect some invisible gadgets that had decorations placed on them .

LBP2 features all new particle effects for things like fire and smoke, and as a result, a level which uses these in a specific or particularly clever way might need rebalancing.