Last night, around the same time Usain Bolt pzwned the 100m sprint at the London 2012 Olympics, the seven millionth level was published to the LittleBigPlanet servers.

It’s been nearly four years since LBP was published, and a lot has happened in that time; for the game series, for us, our friends at PlayStation, and for you guys too.

We wanted to celebrate this incredible milestone with some hardcore statisfaction - for instance, did you know that there were 37,641 levels published just last week? That’s 5377 levels per day, meaning for every minute of the day, 3.7 levels are uploaded.

These stats alone show that despite the game series being fairly old, it is in no way slowing down, and the community is as strong and active as ever before. But there are more! More statistics and achievements we want to share with you, and as as we gathered these together, we uncovered more and more interesting / amazing / hilarious/ weird things to shout about, and we got a bit carried away…

We ended up with this monolithic, and randomly christmas tree shaped infographic, illustrating the road to 7 million levels - from announce, to now, and beyond towards the new LBP games coming out this year.

Thanks to all of you, our LBP playing friends, these achievements are all down to your support and creativity!  Now get ready for a FULL FRONTAL FACT BLAST! (Click for biggie) 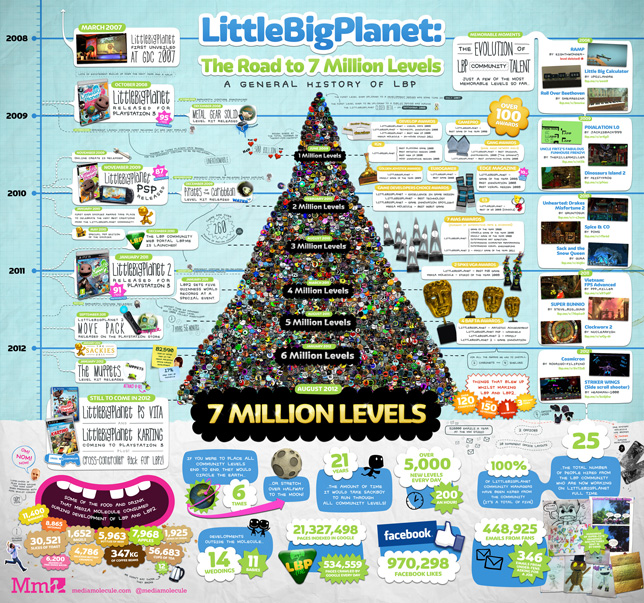