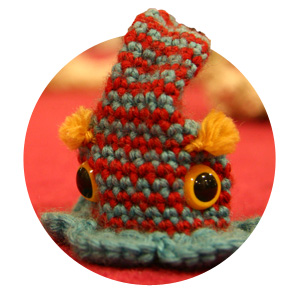 This is the first of what could become a whole series of things, how exciting is that?!

We thought it might be nice for you to meet some of the molecules and get to know them better, find out what they do at Mm, and what other weird and wonderful things they get up to in what spare time we let them have. To help us do that we’ve drafted in our super-duper studio assistant Daisy, everyone wave and say “Hello Daisy!”

So what is all this cake nonsense then? Well, Daisy invited Dave, one of Mm’s original founders, for a cup of tea and a slice of nice cake. Whilst he was off guard, we asked him all about his work on LittleBigPlanet, and all about the other things he likes to do - this is what happened…

We lured Dave in with a pot of tea and an exciting looking cake box from the local patisserie. Once we were comfortably installed in a big pile of bean bags, the tea was poured, the cakes revealed, the questions began. We wanted to find out more about what Dave was all about… Tell us what you do Dave.

“I make dreams come true.” Dave claims boldly. It’s not too far from the truth but not the answer we’re looking for.

“Whenever I’m asked about my job role, I always end up giving these long irritating diatribes about all the things that I do, and so I, I just make games! 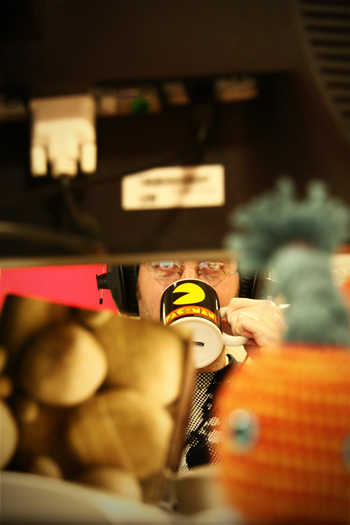 When Media molecule was founded, there were a key set of skills amongst the founders: Kareem was art, Siobhan a producer, Mark was an artist but mainly a designer, which left Dave and Alex, who were both programmers. But programmers can be wildly different from one to the next, so where was the divide?

“I think that the thing I really bring to the team, or at least when we started with LittleBigPlanet,  and we were coming up with the initial ideas, I was the person who came up with the initial prototypes, and you know, invented various bits of physics things and character handling, and fit lots of these ideas together.”

“At least, that’s my point of view. I think, the other guys on the team have different ways of looking at the genesis of LBP that describes it in terms of what they were doing? And so naturally I describe it in terms of what was happening to me. So basically. I did everything. LittleBigPlanet was my invention.”  Dave is anything but arrogant, and so this claim raises a smile…

The past is all good and fun, but we’ve talked about it a lot recently, so I ask to skip forward four years…

“Yeah its been four years since you founded Mm surely, 2006?”

“Oh yeah! I have no notion of time, my best way of knowing how long its been is to work out all the different christmas parties we’ve had.”

I point out that you get two within the space of a year, one at the start and one at the end, so in four years you might have had five Christmas parties.

Systems aside, I ask about how things have changed now the team is so much bigger, what specific things does Dave do now there are more people? Not being incredibly connected to development, from the outside it’s seemed very much that Dave worked lots on the new Electronics.

“Well, that stuff kind of started off with the switches in LBP1; buttons, levers, the various sensors, magnetic keys etc.  They were kind of things I didn’t really work on, they were made by a chap going by the implausible name of Moo, and I was actually somewhat against them initially. In some ways they dilute the purity of the pure physicality of the LittleBigPlanet environment, but then in contrast they are incredibly empowering, and let you do really cool things.”

“If you look at all the really amazing things made by the community, none of them could really have been achieved without the switch system, so there was a fine line between it being elegant and purely physical, and it actually being good to make things with.”

“So with LBP2 we kind of built on that, and a lot of the impetus from that came from the idea of the controlinator, because it’s just a way of wanting to plug the button from your joy pad straight into something in the world, and make something happen without any intermediate weirdness. You don’t have to hack around things, you can just make stuff happen really easily.”

“All the electronics are there to support that, theres a lot of complexity, and some people really love it and geek out on it, other people find it really boring, and I think thats really cool. Hopefully the people who are really into it will make cool gadgets and the other people will be able to take those things and add them into their levels. “

“There are lots of different types of creators in LittleBigPlanet, electronics caters to one set of them, but lots of other features cater for other types - the Sackbots, the music sequencer etc.” 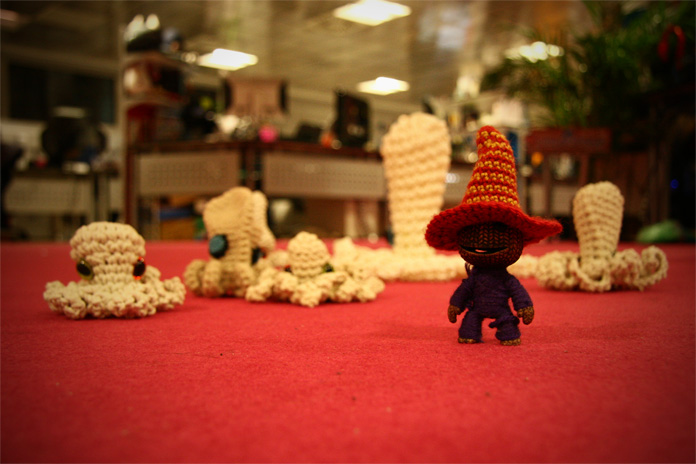 Speaking of different creative types, the Molecules are all creative in lots of different ways.
Aside from Dave’s work on LittleBigPlanet, there are other creative things that Dave likes to play with, he is for instance a master of crochet. We ask him why that interests him so much and how he got into it.

“Well… at school, the two subjects I enjoyed most were Art and Maths…”

Begins Dave, nomming into a cherry and dark chocolate spider shaped cake, and continuing between mouthfuls.

“...Which I think in my head are very connected, but always created weird scheduling problems those classes would always overlap, because they assumed no one wanted to do maths and art”

“In some ways making games is a natural union of those. I think in some ways there are a number of different art forms that are nice unions of art and maths, like engineering and making buildings. I’m not really interested in those, but I tend to like handy crafts, crochet and knitting, although I’ve never tried knitting, to some people its the same thing. It’s nice because its very structured and has maths in it, so you’re doing lots of little bits of maths whilst you are making things, so you can kind of geek out on that, but it’s also up to the creator to make any shape they want.”

“I had the same appeal with origami. It has that same balance between structure and geometry, and again there’s all this mathematical complexity, but ultimately you do it to make things pretty. So in my mind all these things are kind of connected, The more artistic gooey side and the crisp mathematical side.”

“Thats because you didn’t practice! Its all about practice… I’m no good at drawing, but people who are, you can tell, because they do it all the time…”

Mark Healey walks into earshot and Dave raises his voice

It doesn’t have the desired reaction, or in fact any reaction, but Dave ploughs on regardless.

“Mark thinks he’s really good at ping pong, because that’s all he did as a kid, and I beat him at ping pong, yet I’ve no idea what I’m doing. I mostly try and hit the ball back and it’s all panic really…”

“Do you have any other creative outlets… I mean you juggle but that’s not exactly creative…” I ask.

“No its more meditative I would say, it’s pretty profound in different ways. A good excuse for a break. It’s also nice just to wonder around the office just to see what’s going on, everyone here has lots of things they’re interested in, and its nice to see what people are up to.”

“I quite like going to see Kenny, ‘cus he has his special little audio office, no one else does, just Kenny. So I kind of go in there and listen to nice sounds and things, and ask him weird questions. He’s really into Star Wars so it’s really fun to get him excitedly talking about that. He knows he’s being baited but he just keeps on talking whilst you walk away.”

“QA is a cool place to go, they’re a very different type of person, on average than on the development side. They’re kind of… much more brutally honest, I think thats why they’re in QA. So its funny that I can spend ages worrying about all these tiny details of something, and they’ll just happily laugh at how horrible it is. So that’s a good place to learn humility, which I think I might need from time to time. Because I’m Amazing.” 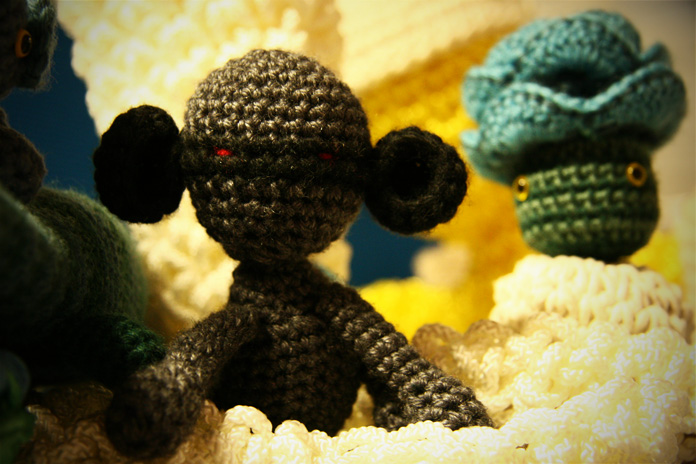 In closing, we ask Dave what he most looks forward to about coming in to work.

“I do look forward to coming in, it would be tragic to ever have a job where you didn’t. I think I enjoy the thought that I can spend a few hours doing work that will result in thousands or maybe millions of people getting value from that. For every minute I’m spending, there are so many more minutes worth of pleasure that that creates, and that just feels like a really good time investment.”

“It never feels as good as being a doctor… but you know, if you can’t have a proper job then its quite good as a… stand in”

I point out the large number of parents we hear from who tell us stories about their children who have disabilities or other social issues, and who have opened up from playing our game, and truly benefitted. That’s in the same ballpark, kinda…

“I try not to think about that too much, gets a bit too teary… it’s cool. There is something empowering about the game we made and I think that appeals to a set of people we didn’t really target, it’s surprising and a cool thing! “

Finally, to close, we ask Dave which cake was best?

There, wasn’t that interesting? There will be more of these soon, and also hopefully you’ll be hearing more from Daisy. If something awesome is happening in the studio, Daisy will know all about it and will keep you abreast, at least she will once she gets back from India.

Dave drank some nice coffee from our coffee club, and Today’s Cakes were a selection of Halloween treats form Maison Blanc.